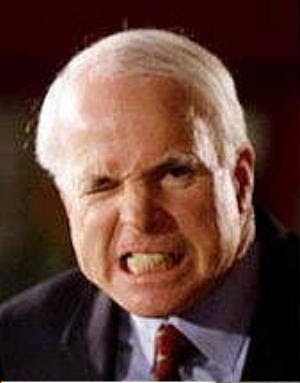 Thirteen Reasons why John McCain is the most dangerous Republican to run in 2008 election:
1. Because he COULD win!

2. He is the least objectionable Republican candidate.

3. He's NOT a fundamentalist.

4. While the American public is not happy with the Republican administration we have now, they MIGHT vote for McCain because they believe he has integrity.

5. NO Democrat would be a shoe-in with McCain as challenger.

6. He is respected as a man who served his country and suffered at the hands of the enemy as a POW.

7. He believes in tax cuts.

8. He has been elected 4 times to the U.S. Sentate. He's experience personified.

9. While generally adhering to American conservatism, McCain has established a reputation as a political maverick for his willingness to defy Republican orthodoxy on several issues.

10. In the 2000 elections he ALMOST beat George W. Bush for the presidency.

11. He won the New Hampshire primary, a very impressive COMEBACK.

12. He's perceived as a straight-talker.

13. No matter what his politics, he's LIKEABLE. Obama might have a chance against him but not Hillary!

Get the Thursday Thirteen code here!

The purpose of the meme is to get to know everyone who participates a little bit better every Thursday. Visiting fellow Thirteeners is encouraged! If you participate, leave the link to your Thirteen in others' comments. It’s easy, and fun! Trackbacks, pings, comment links accepted!

You're so right! I'm ready for a Democrat to win, but McCain is definitely a dangerous Republican. I'm pulling for Obama at this point.

So would you vote for him or is he too dangerous for you? I'm really not sure who I'll be voting for...

#6 is true, for sure, but I'm not sure how that translates into possessing an ability to run the economy. Why is it so bad to have a Republican candidate who doesn't live in the Nineteenth century?

Gee Whiz! He is a man of good background. If he is this good, he should win.

You may want to join the blog burst we are organizing.

Interesting thinking. I like that he seems willing to do his own thing and not stick to party lines.

That said, I'm not sure who I'd vote for if the presidential vote were this week. Lots of ground to cover yet...

I'm guessing his willingness for the war to continue for ten thousand years might hurt him with independents and moderates. Even some very committed Republicans don't want that.

There's also this, which I imagine might come up: Keating 5.

I think he's got about as many drawbacks as Hillary, to be honest. But I'd rather have a decent Republican run than one of the ones who is butt-crazy (naming no names). I just wish McCain weren't such a loose cannon.

I think he could win easily for all the points you put out and also because of his torture experience. He has the experience to make those decisions.

btw, I love the picture on your banner - where is that?

Not to mention a hot wife!

Interesting points. Many of the points you say make him "dangerous" I find make him qualified. I have no idea who my choice is yet but I don't see how some of these points make him dangerous. Almost beating Bush in the past, for example...how is that dangerous? At any rate, thought provoking.

Interesting points you have made.

To be honest, I have not been following the Republican side of things as closely as I really should, but that is most liekly because I have a VERY strong dislike for 90% of the canidates.

However, out of those on the Republican side, I think McCain is the closest thing to being a reasonable canidate. Yes, he has some faults - but he is obviously not concerned about towing the Party line. He is more willing to go with what is best for the people, rather than his own self interests.

To answer some questions that folks have asked why McCain is dangerous, he is NOT dangerous to this country. In fact, given our standing, he woudl be a welcome breath of fresh air.

John McCain is dangerous to the Democrats, no matter who is running. This is because he is Republican enough to get a lot of the GOP behind him. He is Democrat enough to draw independants and even some Democrats to vote for him. He is also likeable and has a good, strong history and background for Forign Policy. He could fix a lot of what has been broken over the last 8 years.

The way I see it, is that McCain can beat Edwards, he has experience and is maverick enough to do it. He can easily beat Hillary because he is likeable and is not polarizing. While a fight against Obama may not result in an easy win...he can pull it off, I am sure.

So, yeah, as a Republican Canidate, he is quite dangerous to the Democratic party and their bid for presidency.

Hey everybody, thanks so much for commenting, I really appreciate it. You know that! One thing though, I'm not FOR John McCain... I just think he would be a formidable opponent for any Democrat who runs. I think he's the ONLY Republican Democrats might cross over and vote for... which isn't a good thing. :)

Claudia the picture on my banner or header is from Croatia, that's my nephew in the distance. Isn't it a gorgeous shot?

I say John McCain is dangerous because he might beat out a Democrat in the election. That's why he's dangerous, Robert!

As I don't like any Republican I know more the Democrats, anyway if he is the pastor or the mormon I hope that they will not win otherwise poor America !

Great post, although he isn't my candidate, he might be my 2nd place guy. Thanks for stopping by. Happy TT!

Interesting post. I'm sorry I couldn't make any other comment because I'm not that familiar with him. Thanks for visiting my TT.

I'm not happy with ANY of the candidates. I don't think any of them are fit to lead our great country. Sad...isn't it?

I'm with you on his dangerousness. Anybody that thinks the war is good, is not somebody I want in office.

Excellent points. I think you're absolutely right. That's why I'm hoping that Huckleberry Hound pulls it out!

Ohhhh, so you just think the Republican party is dangerous. I see. Of course I disagree but now I understand where you were going with that. Thanks for the clarification.

You've got it exactly, anime! That's what worries me about McCain. Of all Republicans HE's the one who COULD possibly beat ANY of the Democratic candidates...a very frightening thing as far as I'm concerned.

Robert, I don't think the whole Republican party is dangerous JUST McCain! Any Democrat could beat any other Republican, Romney, Huckabee, for the opposite reasons I say McCain is dangerous! :)

You're absolutely right, Chris and Marilyn!

I have looked a little at McCain's stances and there is little I really dislike about him, but plenty I do like...it is just that I like Obama more. I am enough of an Independant to vote for McCain over Hillary and Edwards.

I think the only issue that I take with McCain (at the moment - as I can't think of anything else) is his policy for wanting to continue the conflict in Iraq, when it is obviously not popular with the public. The ONLY selling point I can see from his perspective though is that he sees it like another Vietnam, which due to politics proved to be a horrible waste of American lives and money. I think he wants to continue it (albiet with different tactics) so it is not a repeat of Vietnam and a total failure. Remember, while he supports the continuing efforts he is adamantly against BushCo's current policies.

Do I think McCain is bad for the US? Not really. No. In fact, I see him as being better for the US than many of the other contenders on both sides. There are few people that I would support over McCain, but as of this moment I am not endorsing him. If that makes sense.

As of right now, I intend on throwing my lot in with Obama. Time and events will dictate whether or not my stance will change.

You make some good points! It will be interesting to see the results come November.

I have three TTs this week.

Raven's Rides: 13 places I went on my motorcycle yesterday
Raven's RV: 13 things we did in the RV when the power went out
Raven's Range: 13 thoughts about Thursday Thirteen

The link above has links to all three. :)

Right on target. I was so much in agreement with you that I linked your whole post from my site. I think he is the best chance the GOP has in a year where they have had only poor choices.