KEEP THE YOUNG PEOPLE OUT! 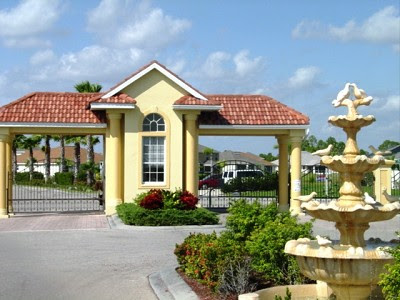 ~For a faster read just read the bolded text and the text in ALL CAPS at the end:~

There's a different kind of discrimination spreading in the United States. Despite all the popular rhetoric about family values, an increasing number of Americans are choosing to live in age-segregated "leisurevilles," where at least one household member must be 55 or older and enjoy living without children. No one under 18 may live there -- ever.

According to conservative industry estimates, more than 12 million Americans in the next decade or so will live in communities that forbid young families. This represents a drastic overhaul in our societal living arrangements.

Age-segregated communities were created half a century ago in the Arizona desert by developers looking for a marketing niche. The first was Youngtown, a modest affair built by Ben Schleifer, an idealistic Russian Jewish immigrant who wanted to construct a kibbutz-like community where older citizens could age affordably and gracefully.

Del Webb, who drew from his experience with planned communities -- the Japanese detention camps he built during World War II -- liked the idea and built the much larger and fancier Sun City right next door.

Experts on aging assumed that seniors would resist moving away from their families and that those who did so would wither from loneliness and depression.

The experts were wrong, and the two developments were very successful. Now, Youngtown is desegregated and Sun City is getting ratty around the edges. But age segregation has never been more popular. And by 2015, those age 50 and older will represent 45% of the U.S. population. 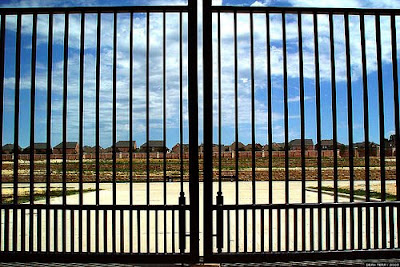 In a dimming housing market, "active adult" communities (most residents are in their 50s and 60s) remain the industry's sweet spot. Hundreds of communities are breaking ground each year, often in the North. But many are large Sunbelt leisure plantations, such as the Villages in Florida, the world's largest retirement community. It is nearly twice the size of Manhattan and will have a peak population of 110,000.

The Villages has two manufactured downtowns owned by one person (a third is on the way) with faux historical markers, more than three dozen golf courses and golden oldies pumped out of lampposts. Residents tool around on 100 miles of golf trails, often in carts pimped out to look like Hummers and Corvettes. There are continuing education courses, but many of the seniors prefer golfing and nights of line dancing to baby boomer classics like Fleetwood Mac's "Don't Stop Thinking about Tomorrow."

Ten years after the introduction of Viagra, retirees are taking full advantage of what a child-free environment provides: lower taxes, untrampled lawns and better sex.

Like many of us, older Americans are thirsting for community, and these developments seemingly provide it. Suburban sprawl is not only alienating, its car dependency makes aging-in-place there near impossible, and with Americans moving, on average, 12 times during their lifetimes, few can return "home" -- everyone's gone. Add to this our fiercely youth-centric culture, the deteriorating civility of our society's younger members and the wide disparity among local tax rates, and you have a recipe for secession.

But though secession may be a pleasant experience for some, it comes at a steep price for society.

Age segregation only reinforces negative stereotypes, leads to a willful forgetting of commonalities and encourages our less charitable instincts. 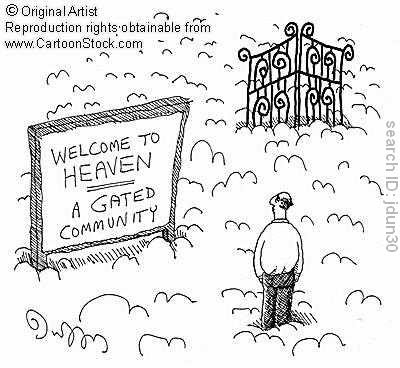 In Youngtown, for example, a couple was fined $100 a day for sheltering their grandson from a physically abusive stepfather. And in Sun City, residents defeated 17 school bond measures in 12 years (before de-annexing from the school district) because they had little interest in educating another generation of children. Meanwhile, students in the neighboring communities were forced to go to school in staggered shifts. Even Schleifer was embarrassed by the consequences of his idealistic contribution. "Our first obligation when I was a boy was to give young people an education, no matter what sacrifices it took," he said of the bond failures.

Now desegregated, Youngtown has regained its vibrancy, but Sun City is at risk of becoming a necropolis as its generational strife turns inward, with older residents resisting efforts by younger retirees to reinvest in the community. Although Youngtown was forced to desegregate because of faulty bylaws, age discrimination is not only legal, it's protected by the federal Fair Housing Act.

Isn't it time we ask ourselves as a nation if we really want to be encouraging communities where birth certificates are scrutinized at points of entry, and where young visitors are reduced to human contraband?

Congress should either raise the entry age for these communities to something actually approaching old or put an end to age segregation altogether.

Meanwhile, reengaging with the younger generations -- rather than gating them out of our lives -- could result in a far happier outcome for all of us.

Andrew D. Blechman is the author of "Leisureville -- Adventures in America's Retirement Utopias."

Read my article on gated communities
SO I SAY

Posted by maryt/theteach at 3:21 PM

I'm with you on everything but horn-honking and motor-revving. Great article!

Mary, Bob and I have lived in a gated, 55 or older community, since he retired, 10+ years ago. Any place you live, there are trade-offs. One of our major considerations, was that we could travel with out fear of having our home vandalized or burgalized when we were gone. With Bob's background at LAPD, we know that neighborhood teens are the most likely to be guilty of these crimes - eliminate teens and you eliminate that aspect.

It really is nice, here. We always have something, or nothing, to do depending on our fancy. Come visit, any time.

I live in an old house -106 years old now -built by my grandparents. I grew up in this house, with my Mom and my grandparents. And now, my daughter, her husband, their two little ones and his oldest daughter live here with me. No, not in perfect harmony, but relatively peacefully. I couldn't imagine living without my grandkids around me. I wouldn't want to live if they weren't with me, for that matter. Sure they rip things up, fight, have hissy fits and the like but it's their energy here that sustains me, even when they are misbehaving. And I get to watch them reach various milestones first hand too. I agree with your tenets on living in your own home and including all the little annoyances too! (Just leave out the loud, fast-moving, continuous stream (so it seems some weekends) though of the four-wheelers and buzzing motorbikes though. Them I can do without and so sayeth most of our neighbors, many of whom are of the younger generation.
Peace.

I think the key always comes down to respect and consideration for others, no matter where we live and who our neighbors are.

There are so many of these communities here in So. Cal. My step-mother's mother married a man, (both in their 80's) and she moved into his house on a golf course in an over 55 community in Hemet. She hated living there. Her neighbor was hiding her son (he'd had a breakdown and was barely functioning), and then the (very nosy) neighbors from across the street turned her in. Can you imagine? She had to move so she could take care of her broken son? I for one, want to be around youngsters, and twenty-somethings, and so on and so on. It would be a bore just to be around older people all the time. (I'm not 55 yet, but my husband is) you won't find us in some gated neighborhood. I'm with you on this!

I agree. I think both young and old can benefit from each other.

Oh and I wanted to add that there were plans to build an assisted living home in my neighborhood that was quickly shot down. I argued that I love having people of all ages around. (We have a school in the neighborhood as well). I think it would be a great volunteer opportunity I could do right here. Oh well, I guess people just don't see the value in that.

lvoed this comment maryt ....i love kids so i would be out of place gated...just today i saw a little boy next door with a patch over his eye{lazy eye} and the patch was daffodills and i asked him why flowers and he said, i knew it,, i told her not to put it one my eye, oooooh wait till i get her...see what i'd miss

Then there's the story of the Sun City residents who were up in arms about some firefighters from a neighboring city who were using the track at their recreation facility in order to run and keep in shape in their down time. When told they needed to leave, the firefighters said, "Fine. We'll leave. And then try calling the fire department when you have an emergency - see how quickly we do or don't respond."

My sister-in-law's in-laws live in one of these places in Florida. They love, love, love it. They come back up to New York to visit their grandkids, but then they love their little community. If it works for them, why should it be such a problem for others? Can't they enjoy retirement in their own way? If they are excluding younger people, it's for a reason. I say they've worked hard in life, let them enjoy their senior years as they like.