Mo has given us the word SWING for this Manic Monday. 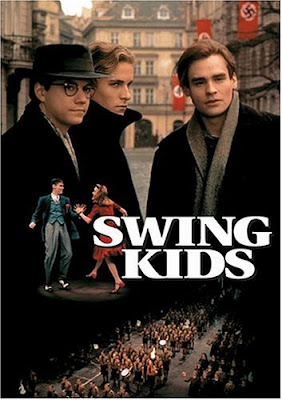 In pre-World War II Germany, Swing music becomes the underground movement of young people. Two high school students, Peter Müller and Thomas Berger (played by Robert Sean Leonard and Christian Bale), attempt to be Swing Kids by night and Hitler Youth by day. The impact of this decision is felt acutely by their friends and families. Soon dancing and fun lead to more difficult choices as the Nazis begin tightening their grip on Germany. A seemingly charming but intimidating Gestapo officer Herr Knopp (Kenneth Branagh in an uncredited role) insinuates himself into their lives. Each member of the group is forced to face some tough choices about right, wrong, and survival. This is the story of one group of Swing Kids and how Nazi rule and persuasion tore them apart and set them against each other.

"In a world on the brink of war, you either march to one tune or dance to another." 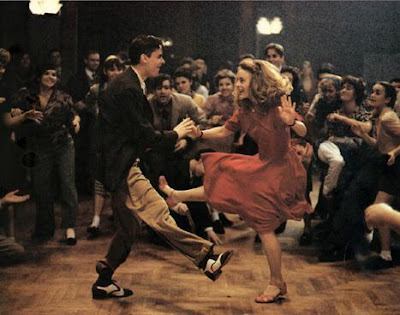 Kenneth Branagh is uncredited in the role of Herr Knopp — he refused billing after being told he'd be billed above the younger stars, saying that the boys were the real stars of the film and it belonged to them only. Branagh had worked with both Robert Sean Leonard and Christian Bale previously in Much Ado About Nothing (with Leonard) and Henry V (with Bale). 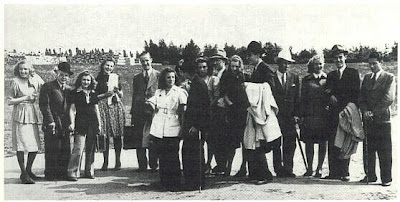 The real Swing Kids wore the symbol above. Only another Swing Kid knew what the symbol meant.

This is a film worth seeing. It will make you cry. The boys just want to have fun and enjoy Swing music at the beginning. But eventually they must face falling in with the Nazi regime and the Hitler Youth or standing against them.

theteach
Posted by maryt/theteach at 4:10 AM

I love this movieand own it. thats when dancing was really dancing.

Fair play to Brannagh. He is a class act. I wish he were more visible.

I remember seeing this movie for the dancing and being just a bit unprepared for the intensity of the over-riding plot.

I didn't see this movie but it sounds great. Great use of the word. Happy MM :) and I hope you had a wonderful Mother's Day :)

This is a divine movie! I have the soundtrack.... It was that good!

I've seen it! I don't remember the details but I know I've see it :o)

You know, I've never seen this movie = will have to put it on the 'to-see' list!

I've heard of this movie, but didn't realize it had those people staring in it. I haven't seen it, but now I'm interested.