Think Green Thursday is a brand new meme by Gina, aka Pagan Sphinx.

Here are the rules (which may evolve over time)

1) The prominent color of your photograph does NOT have to be green. This is not so much a color-based meme (though it can be) but one where people focus on the concept of environmental awareness, renewable energy and protecting natural spaces, animals and their habitats.

2) You do not have to limit yourself to posting photographs. You may include other images that get your point across, links to articles or websites that are relevant to the theme, poems, art - you name it. You can be creative.

3) Please link back to the Think Green Thursday blog. 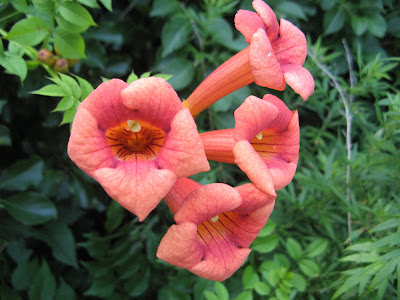 This is my photograph from the Jamaica Wildlife Preserve. We visited in the Fall of last year. Here is information about this wonderful wildlife refuge run by New York Harbor Parks. org.

The Jamaica Bay Wildlife Refuge, a unit of Gateway National Recreation Area, is one of the most important urban wildlife refuges in the United States. Encompassing 9,155 acres, it is comprised of diverse habitats, including salt marsh, upland field and woods, several fresh and brackish water ponds and an open expanse of bay and islands- all located within the limits of New York City. The Wildlife refuge is nationally and internationally renowned as a prime birding spot where thousands of water, land and shorebirds stop during migration. More than 325 species have been recorded here during the last 25 years.

Each season has different possibilities for natural phenomena. The Spring brings warbler and songbird migrants. A special treat is the peculiar courting display of the breeding American Woodcocks during the evening in late March. Starting mid-August is the migration of southerly bound shorebirds. The Fall is noted for migrating hawks and raptors, songbirds and warblers and great numbers of waterfowl. Also to be noted are the migrating Monarch Butterflies and dragonflies. 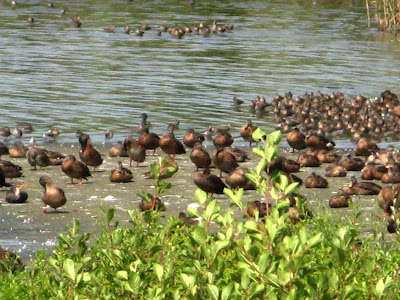 Quite a number of birds breed either within the area of the trails or on the islands that are in the bay. Some of those species on the upland and salt marsh areas are Canada Geese, Yellow, Common Yellowthroat and Redstart warblers, Osprey, Oystercatchers, Willets, and Tree Sparrow. Less visible breeding areas hold nest sites for Black Crowned and Yellow Crowned Night Herons, Great Blue Heron, Great and Snowy Egret, Glossy Ibis and Barn Owl. This has been abetted by an active nest box placement program and the protection of prime nesting areas during breeding season.

The refuge is also productive for the now rare native flora and fauna of the coastal areas. Due to introduction of native species and creation of conducive habitat, Jamaica Bay Wildlife Refuge is the home to breeding reptiles and amphibians, small mammals and butterflies.

Go on over to visit Gina at Think Green Thursday and explore her new meme and meme participants.

theteach
Posted by maryt/theteach at 10:26 AM

I'm so glad you're participating too. This is a great post, Mary.
I hope Gina gets the kinks worked out soon to her satisfaction. She has a wonderful idea here.

Mary, what a fantastic post and beautiful photographs. Your write-up is excellent. Just the right length, interesting and relevant. Exactly the kind of thing I had in mind.

Just remember, not every post has to be that involved because then it may become a drain.

Do you know how to get the free version of Mr. Linky? WHen I went to the site, the only free option involved registering my blog but then it did not give me a way to do that on the menu provided. I'll try again but if you happen to have any knowledge of how to get around that, please email me when you have a chance.

Thanks for being on board with this!

the flower is lovely but I adore the second photo!! I love that they have a safe place to be

This is a beautiful first entry. I hope there will be a lot more preservation areas. These people do remarkable job to keep everything intact. Have a great day, Mary :)

In The Spirit of Earth Day

Great shots, and interesting information too!

I want to invite you to join my Purple Photo Passion meme. I figured it was my turn :)