From an article by Errol Morris in the NY Times: "Photography As a Weapon"

The following photograph is the real photograph that Colin Powell described and showed to convince the American public that Iraq had Weapons of Mass Destruction (WMDs) in 2003. And now look at the one below it: 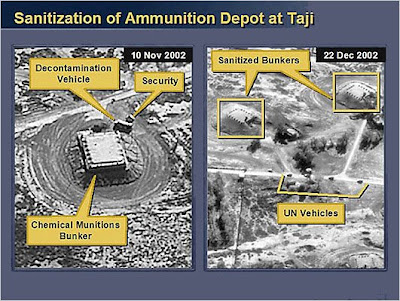 Photographs presented by Colin Powell at the United Nations in 2003. (U.S. Department of State) 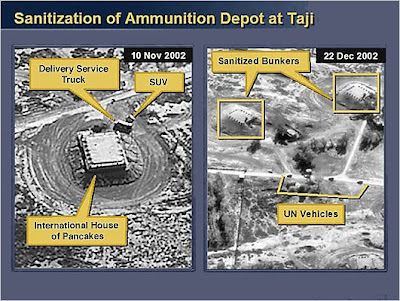 Reinterpretation of photographs presented by Colin Powell, by Daniel Mooney.

ERROL MORRIS: No. Not that I’m aware of. But doctored photographs are the least of our worries. If you want to trick someone with a photograph, there are lots of easy ways to do it. You don’t need Photoshop. You don’t need sophisticated digital photo-manipulation. You don’t need a computer. All you need to do is change the caption.

[The photographs presented by Colin Powell at the United Nations in 2003 provide several examples. Photographs that were used to justify a war. And yet, the actual photographs are low-res, muddy aerial surveillance photographs of buildings and vehicles on the ground in Iraq. I’m not an aerial intelligence expert. I could be looking at anything. It is the labels, the captions, and the surrounding text that turn the images from one thing into another.[6]

Look again if you missed the International House of Pancakes!

theteach
Posted by maryt/theteach at 2:01 PM

LOL! That is funny... and COULD even be true!

I never miss IHOP! Sorta confused me though, the parking lot here is a lot less crowded than I am use to. This mentality is right up there with plausable deniability!

The New York Times would know how to doctor photographs. They done their fair share. I don't believe a word that come from the NYT. Just saying. :)

And how do we know that's Iraq? Hmmmm? Looks a lot like Arizona to me.

And the NYT is our newspaper of record! Do we trust the Washington Post? The LA Times? What do we do? :(