It's not something I want to report on but I'm saddened, even angered, that the Obama campaign withdrew it's offer of seats behind Obama in Detroit to two women who were wearing head scarves. 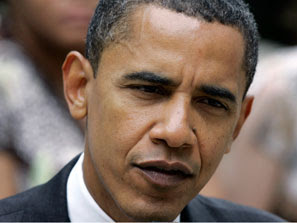 It wasn't Obama who made this decision but a member of the campaign staff who felt, what? that if anyone saw women in head scarves behind the podium, the media, the right-wing Republicans and Fundamentalists would make a big deal out of it?

Well, they WOULD make a big deal out of it. The media justs waits for something, anything, to nit-pick about. They do it to Obama, they do it to McCain, they did it to Hillary. Something that they think will horrify and draw an audience.

So does that mean Obama staffers should discriminate? Act in such a way as to preclude Muslim women in scarves? Muslim men in beards?

In the past have presidential campaign staffers picked and chosen only certain faces to stand behind a presidential candidate? You bet they have! Have they made sure there weren't too many black faces? too many Latino faces? You bet! Don't want "white" America thinking their candidate is "liked too much" by certain people.

But if Obama is different, if he is pledged to diversity then his staffers CAN'T discriminate. And Obama should let them know exactly that. AND he should invite Hebba Aref to a future event and have her sit behind him and a little bit to the left so the TV camera can see her.

Read an article in Politico

theteach
Posted by maryt/theteach at 4:48 PM

I wrote a whole eloquent (!) response and blogger zapped it. Grrrr. Hate recreating comments. Now that I have ranted about that... I totally agree with you. Given the state of our media and the opposition, they were probably sort of damned if they did and damned if they didn't, but bigotry is always the wrong way to go. Hopefully, if Obama handles the situation well, though, it may defuse this as an issue in the days ahead. We can hope so anyway.

I'm with Raven, if you're going to get criticized by someone either way, then choose the morally right path -- no exclusion, no discrimination.

I was/am very disappointed and I don't think the campaign staffer apologizing was enough.

I don't envy him the impossible place he is always in though.

He was quoted back in April as saying that every time he said he wasn't a "secret Muslim" he felt he then needed to remind everyone that being a Muslim wasn't a crime or a sin.

I'm so sick of this crap. I want to talk about my health insurance, my mortgage, I want to hear about doing something about the Army Corp of Engineers so we don't keep having this once in a lifetime floods every freaking year!!

I once worked for the Commission Against Discrimination here in my state. It's a circle. It always has been. I agree with Raven, with careful handling, there is always hope.

I guess it depends on where you get your information. The LA Times reported about this incident, today. Their report said it was volunteer staffers who made these decisions, not paid staffers. I me this makes a difference.

Well, well. I am the most liberal fundamentalist you could run into. It was not the right thing to do but probably it was politically correct when you're running for office.

Had they (Obama machine) done their proper screening those two wouldn't have even been near for the cameras to pick up.

The L.A. Times is a very liberal newspaper--I read it occaisionally. I wonder if they had a reporter over there? Not a whole lot of people go to Detroit.
..

Yeah but we also want him to win. He's got to use some media savey to get there. Being the first black president is huge and he's gonna need all his smarts to get there. He's already been accused of being into Islam that will not help him. In fact it will hurt him. I can totally understand why he has to play the media game and I believe as un-pc as it is right now he needs to do what it takes.

Media is nothing but glorified fiction of one man's opinion. Being that Obama is the nominee and our next president, the media is trying its hardest to dig up dirt on the man, and I think eventually it'll all backfire. He has handled other things in the past with eloquence and dignity...he'll do it again.

Come see my show n tell today. See what I got.

I think the media would definitely use it if they were behind him. And I could just hear the reps calling it out just as they did with his middle name and so on and so forth. I understand where you coming from, but it would hurt him as oposers would use it against him. At least that's my thought for Friday. Have a great weekend!

Well said. I agree with you that his staffers shouldn't discriminate. I also agree with those who commented here today that it wouldn't matter because the media is going to pick nits about anything they can sensationalize.

It's a sorry state of affairs.

Did you hear about the Dunkin Donuts thing? Sheesh, getting worked up about head scarves is stupid.

However, this makes me wonder about the inside of a political campaign. Any campaign. How much does the candidate know about his own image making process and how much does he stay purposefully ignorant of?