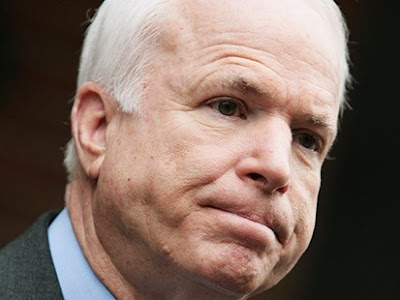 Has there ever been a more repugnant example of political pandering than John McCain's decision to vote against a bill banning waterboarding, putting hoods on prisoners, forcing them to perform sex acts, subjecting them to mock executions, or depriving them of food, water, and medical treatment?

That's right, John McCain, the former POW who has long been an outspoken critic of the Bush administration's disturbing embrace of extreme interrogation techniques.

But that was before his desperate attempt to win over the lunatic fringe that is running the Grand Old Party.

I don't know but Democrats had better pay attention to what McCain is doing. He's NOT an alternative to Clinton or Obama if you think he is.

Posted by maryt/theteach at 1:02 PM

I don't know much about American politics being a Canadian, but that sounds beyond extreme.

Amen to that! (just came from one of the religious blogs)